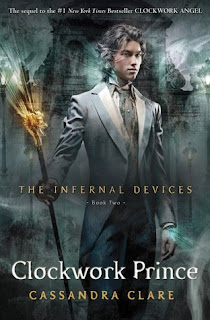 Description from GoodReads:
In the magical underworld of Victorian London, Tessa Gray has at last found safety with the Shadowhunters. But that safety proves fleeting when rogue forces in the Clave plot to see her protector, Charlotte, replaced as head of the Institute. If Charlotte loses her position, Tessa will be out on the street and easy prey for the mysterious Magister, who wants to use Tessa's powers for his own dark ends.

With the help of the handsome, self-destructive Will and the fiercely devoted Jem, Tessa discovers that the Magister's war on the Shadowhunters is deeply personal. He blames them for a long-ago tragedy that shattered his life. To unravel the secrets of the past, the trio journeys from mist-shrouded Yorkshire to a manor house that holds untold horrors, from the slums of London to an enchanted ballroom where Tessa discovers that the truth of her parentage is more sinister than she had imagined. When they encounter a clockwork demon bearing a warning for Will, they realize that the Magister himself knows their every move and that one of their own has betrayed them.

Tessa finds her heart drawn more and more to Jem, though her longing for Will, despite his dark moods, continues to unsettle her. But something is changing in Will; the wall he has built around himself is crumbling. Could finding the Magister free Will from his secrets and give Tessa the answers about who she is and what she was born to do?

As their dangerous search for the Magister and the truth leads the friends into peril, Tessa learns that when love and lies are mixed, they can corrupt even the purest heart.

My thoughts on the book:

I am not a reader who focuses on writing style, in particular. I do believe that anyone who can breakdown my mental block when it comes to poetry must have some skill. That being said, I really enjoy the way that Cassandra Clare writes. She is able to create a fully dimensional world without being stuck on her descriptions in general. She has a good feel for the world of Steampunk that her characters inhabit. I never feel like I am being taking miles from the story just to hear about it’s surroundings or atmosphere; that is a very big deal breaker for me. We can also see, as readers, how much she loves books. Her descriptions of them and the libraries they are found in just makes me all the more comfortable in her world allowing my imagination to soar faster and higher.

I mostly read for character and plot. Characters are a strong suit for Cassandra. They come across as human which is the first and most important element to catching the interest of readers, especially this one. The Clockwork Prince gives us a more in-depth look at the relationship between Jem and Will. The elements that I found most endearing were how as parabatai they found new strength in their connection as well as hidden strengths as individuals.

The best surprise in this latest installment was the growth in Sophie. I was always intrigued by her origin in the story but in this book, we really get to see her character shine. Henry and Charlotte’s relationship adds an unexpected element of warmth to this book which I was delighted to experience and enjoy. We also get a bigger view of the Shadowhunters and their world, past and present, allowing for some interesting new characters, old enemies and friends (Magnus Bane is one of the best things in this book!), a chance to grow and add some mystery. The only character drawback I experienced was in Tessa. Even as she was going through the turmoil that the overall plot called for, I found myself wishing she could be a little less conflicted and indecisive. Her “will she, won’t she” dragged the action and my reading at times.

The plot is delivered as any second book in my opinion. Mortmain’s role is intriguing but not all that menacing. As a setup for a future confrontation, I do think it works. We are given a small bit of resolution and fuller insight to the mystery of Tessa and Will as individuals so I feel the job of continuing the action was done sufficiently. (Again, let me say that Magnus Bane is a great plot device and I can’t wait to see what he does next.)

Overall, I enjoyed the read and the few surprises it held. I am definitely awaiting the next installment with reserved anticipation.
Posted by Kate at 6:51 PM

Add my button to your blog!